Chris Keeling has a very particular set of skills — the kind that matches perfectly with his new role as Studio Director for Bohemia Interactive Simulations’ Orlando office. Combining military service and video game development experience, Chris has worked on game titles like Panzer Elite and America’s Army and, just prior to joining BISim, worked at Wargaming.net, where he contributed to Order of War, World of Tanks, World of Warships and more.

“I started out my career in the U.S. Army infantry, shooting lots of guns and blowing stuff up,” Keeling says. “I was then offered an opportunity to go into military intelligence and special operations. I did that for several years and then started doing video games.” 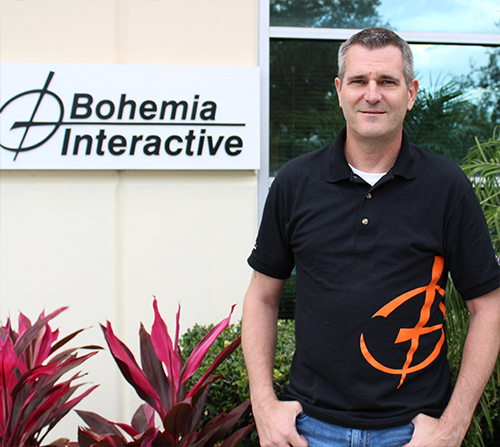 During his career, Chris earned his MFA in video game production from National University and served as program manager of Full Sail University’s Game Design Bachelor of Science program. He also serves as a volunteer on Full Sail’s Program Advisory Board.

Chris wasn’t searching for a new job when he went to visit BISim’s Director of Design Andrew Barron.

“I had seen that [Andrew] spoke [in 2018] at the Game Developers Conference and was intrigued by his presentation. I went to Prague to talk with Andrew and see if they could rent out programmers, but ended up with a job offer,” he said.

As Studio Director, Chris is helping guide development and demonstrations of BISim’s work on technology for the U.S. Army’s Synthetic Training Environment (STE).

“It’s incredibly interesting from a simulation perspective and from a broader training technology perspective,” Chris says of the possibilities of using cloud-enabled simulation with STE. “With STE, you could have a platoon in Afghanistan virtually in the the same space or village with the platoon in the U.S. that is going to rotate in. The deployed group can show their replacements the places where they need to watch out for in that detailed, virtual environment. Then when the handover happens, that new platoon already knows the village.”

Chris is proud to be part of the BISim team. “I used VBS when I was training to go to Iraq,” he says. “BISim is like the thoroughbred of the milsim industry. If I could pick any company to work for it would be BISim. I like the feel of what we are working on. Here we are helping people learn to survive in combat.”

Chris also has a role in helping expand and grow the BISim team.

“We have a bunch of positions opening for engineers and QA,” he says. “We’re looking for team players and people who want to make a difference, not just make a game.”