For training Forward Air Controllers (FAC), Virtual Battlespace is really the best and easiest to use.

The SIMFAC is an immersive air-land theater simulator. It offers a 180-degree field of view courtesy of its massive, 4m wide x 2.2 m high, curved screen. The high-quality pictures are generated by two high-resolution video projectors. Enhancing the immersivity, retractable video eyewear positioned on the trainee's helmet provides 360-degree vision. There is also a VECTOR binocular for observation and grid extraction, an IZLID 1000 for night IR procedures, a Ground Laser Target Designator plugged into the system. They allow a full replication of the FAC's equipment.

As the virtual environment for the SIMFAC, VBS delivers a realistic reproduction of the battlefield.

We needed a level of graphic detail that only VBS can sustain,” said Lt. Col. Christophe Aubé, Commanding Officer of the French and German Air to Ground Operations School in Nancy. “For training Forward Air Controllers (FAC), Virtual Battlespace is really the best and easiest to use. The environment of the battlefield is critical for decisions about whether to engage or not. With VBS, I can add anything I can dream about—OPFOR, armor, UAVs, weather, civilians, artillery—with a couple of clicks.”

For even greater mission-readiness, VBS’s terrain generation capability enables high-detail replication of real-world terrains. This means that trainees can ‘see’ and train in their next combat environment, ensuring they are much better prepared for deployment in a hostile foreign territory.

“The best training tool is to put the FAC trainee in a very living simulation environment where you can apply pressure and they can gain respect for the flow and context of close air support situations,” said Ltc Aubé. “In VBS, they can do it as they would in real life, but in a safe environment.”

To manage the complexity of the operational aspect of the system, the SIMFAC is linked to a Tactical Operation Center (TOC). Up to six personnel can work in the TOC in order to carry out the coordination and the animation of the missions in real time. A ground force commander, a tactical air controller, an artillery officer and radio operators can be trained during a session. The SIMFAC itself can train two trainees simultaneously: the National Fires Observer (NFO), working beside the FAC, extracts the target coordinates; the FAC is responsible for aircraft guidance and the fire command decision.

Efficient mission preparation is not the only benefit of the SIMFAC. With SIMFAC, trainees require significantly less air support time to obtain their qualifications, resulting in significantly less expenditure on aerial activity. Indeed, one third of the annual aircraft usage needed to maintain the FAC qualification will be done with the SIMFAC. To maintain currency, FACs are required to complete 12 training runs a year. The next STANAG will authorize 50 percent (6 out of 12) for annual currency and 30 percent during initial certification.

The SIMFAC simulator received awarded NATO accreditation in September 2013, just 6 months after delivery to the school. This official endorsement allows the French to use the SIMFAC to provide training for close air support (CAS) operations in Types 1, 2, and 3 in both day and night scenarios as well as LASER CAS. It is the only system within NATO with a full spectrum accreditation. Six nations have accredited simulators.

Aubé, the school commander, adds, "VBS also allows NATO interoperability as this software is widely used within the alliance. Therefore we can share databases, maps, scenarios and procedures very easily. Buying a sim is not only about getting the hardware—the heart of the system is the software. Nowadays getting a low-cost simulator bought 'commercialy off the shelf' means also that you can aim for a high level of training. SIMFAC is a perfect example : affordable but very effective."

“We have noticed the quality of training improve. On day one, trainees who have gone through the simulation training are displaying a level of knowledge that was previously obtained only after six to seven runs, and if they are not ready for live training we can simply postpone them in order to adapt their preparation,” said Ltc Aubé. “Trainees are much more confident when they arrive for live training because they are prepared for the tempo of the exchanges with pilots in the air. I am saving six to seven runs, which means saving fuel and Euros.” 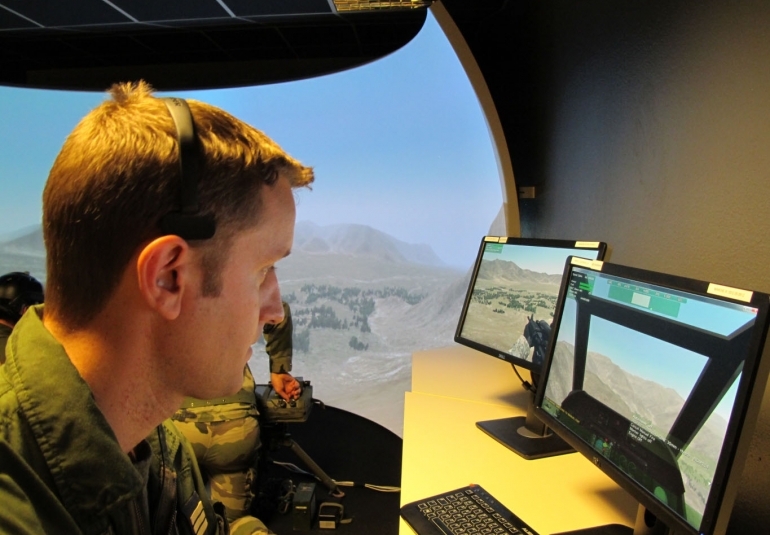 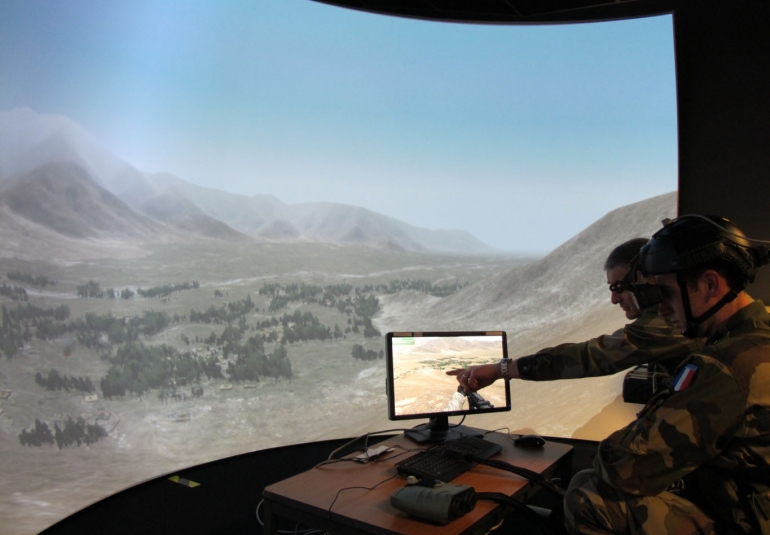 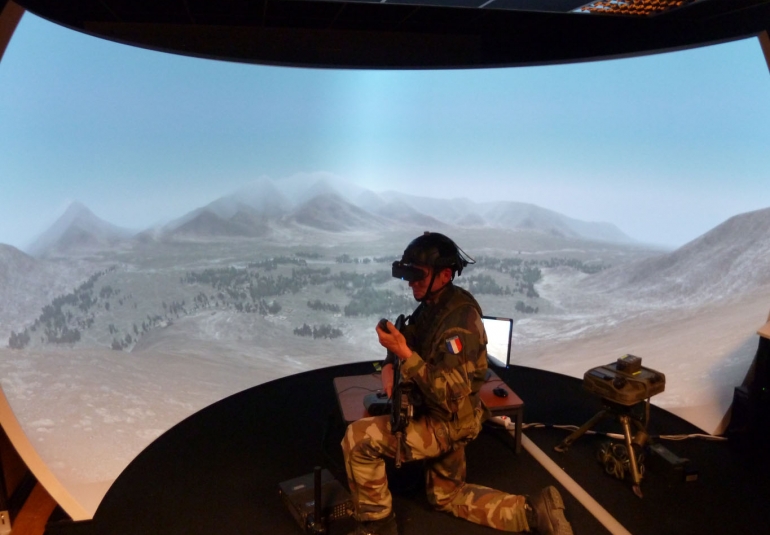 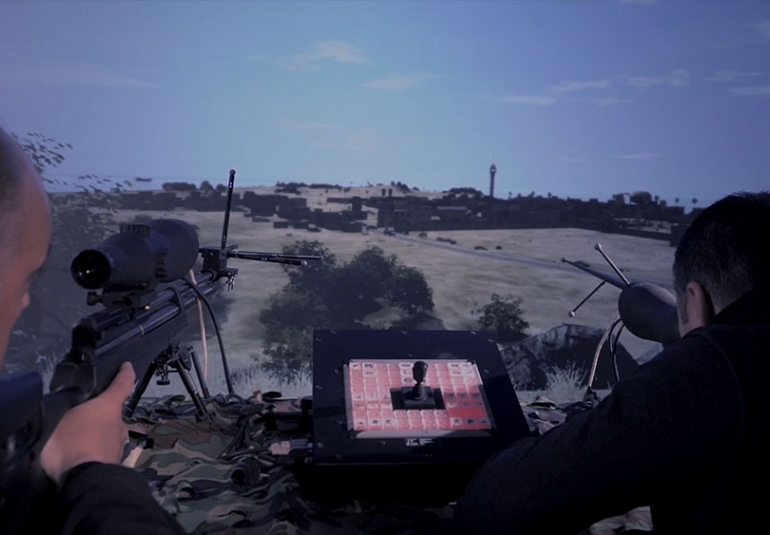 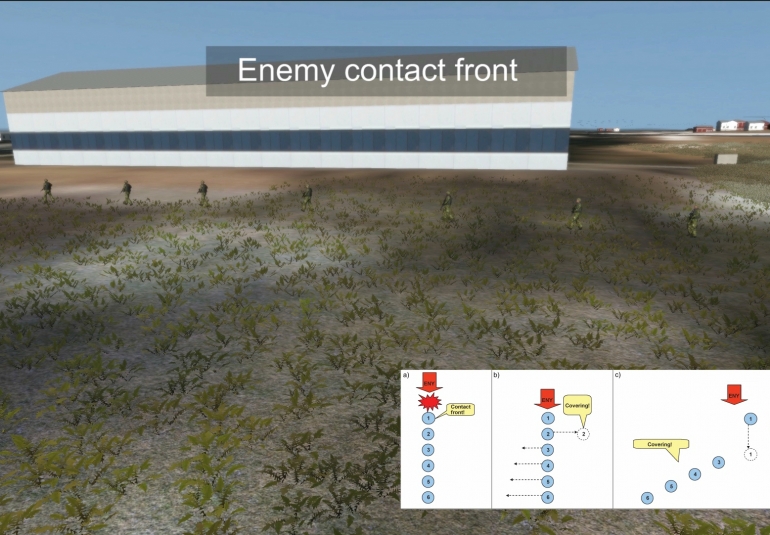 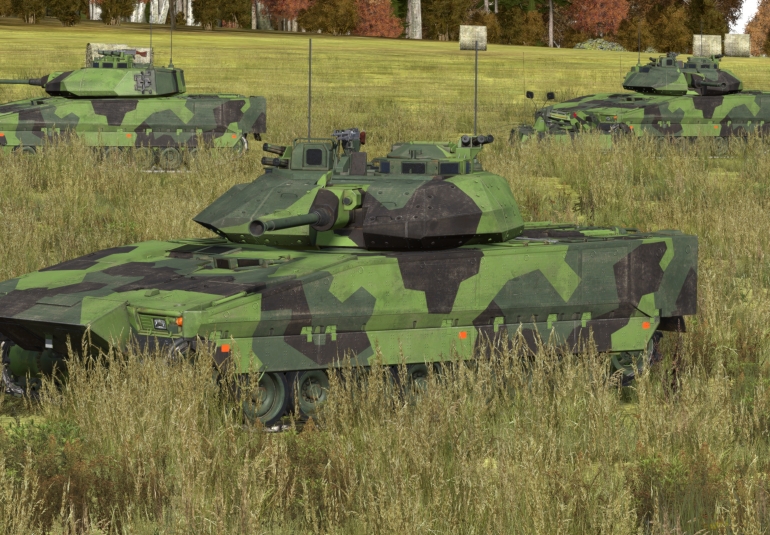