VBS4 offers a massive step change in modularity, openness and ease-of-use as well as the performance and terrain enhancing capability of BISim’s new engine, VBS Blue. VBS4’s new workflow and capabilities amplify your training efforts by enabling users to start training faster, make edits and updates to training scenarios and terrains with greater ease and collaboration, and simulate training scenarios anywhere on the virtual Earth. Watch the VBS4 video here!

Visit BISim and our booth partners at Booth 2534. Contact sales.us@bisimulations.com to schedule meetings and product demos.

At I/ITSEC 2019, BISim and partners will showcase a range of new products, capabilities and training applications at booth 2534.

These include the following demonstrations:

VR Flight Trainer - Take a test flight of the T-45 VR Part-Task Trainer, developed by BISim for the U.S. Navy. The VR-PTT replicates the crewstation, avionics, and flight dynamics of the T-45 aircraft using VR technology, FLEX-air (serving as the simulation host and providing all systems modelling, avionics, flight models, animations, and interactions) and visual environment by VBS Blue IG, BISim’s powerful 3D whole-earth image generator, to provide training at the point of need. Visitors to the BISim booth will be able to take a test flight using newly integrated Valve Index and VRgineers’ Xtal headsets. 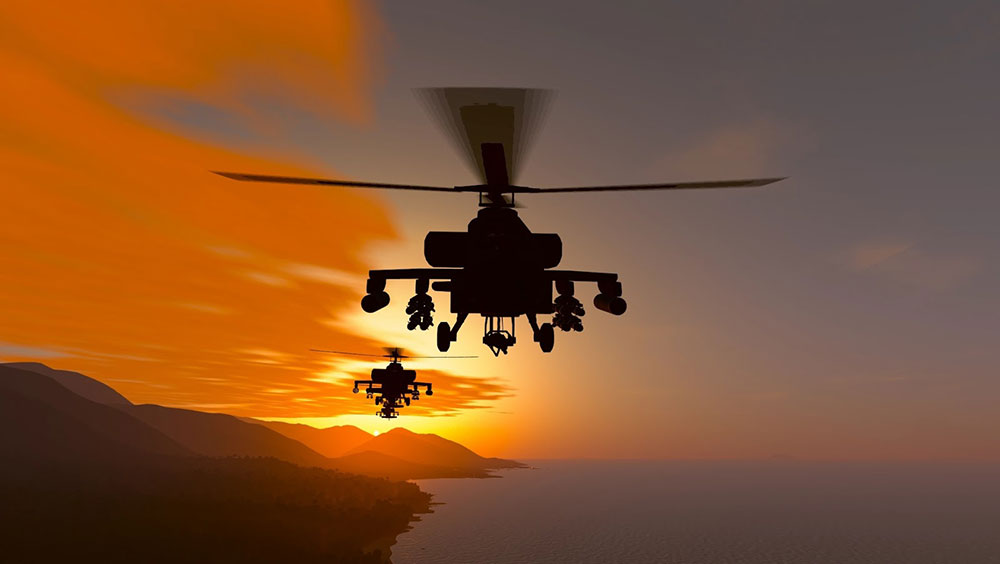 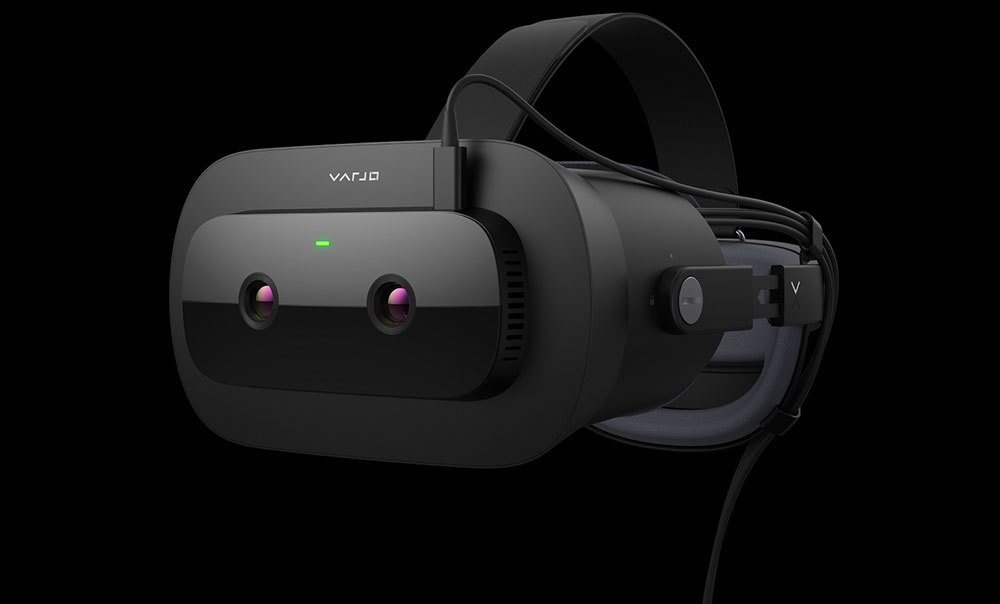 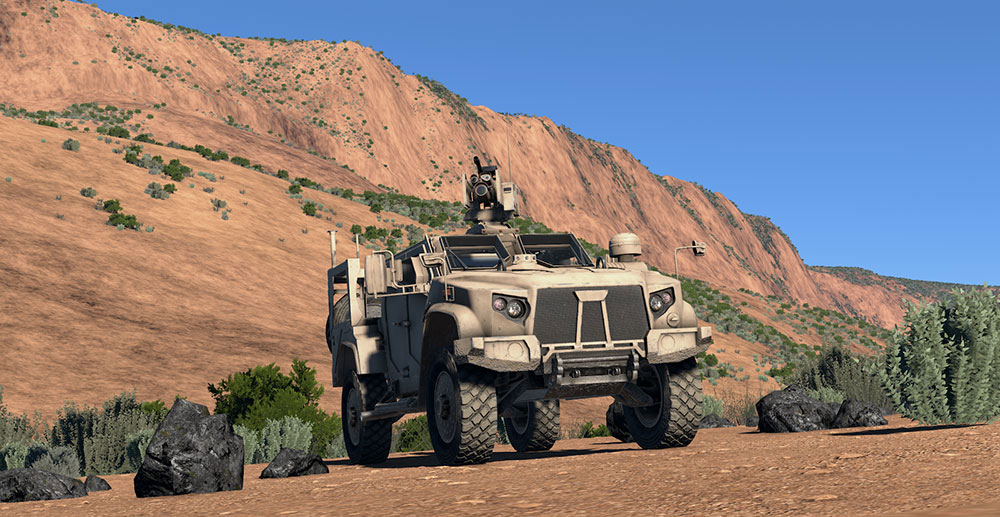 Beers from Around the World
Tuesday, Dec. 3. Booth #2534, @1700
Join BISim staff and booth partners for a sampling of beers of the world.

VBS Information Session
Wednesday, Dec. 4 , Room #S322 @1330-1500
BISim invites military and industry to learn about the latest updates to the BISim product line and hear our plans for upcoming releases and other future tech. Register here. 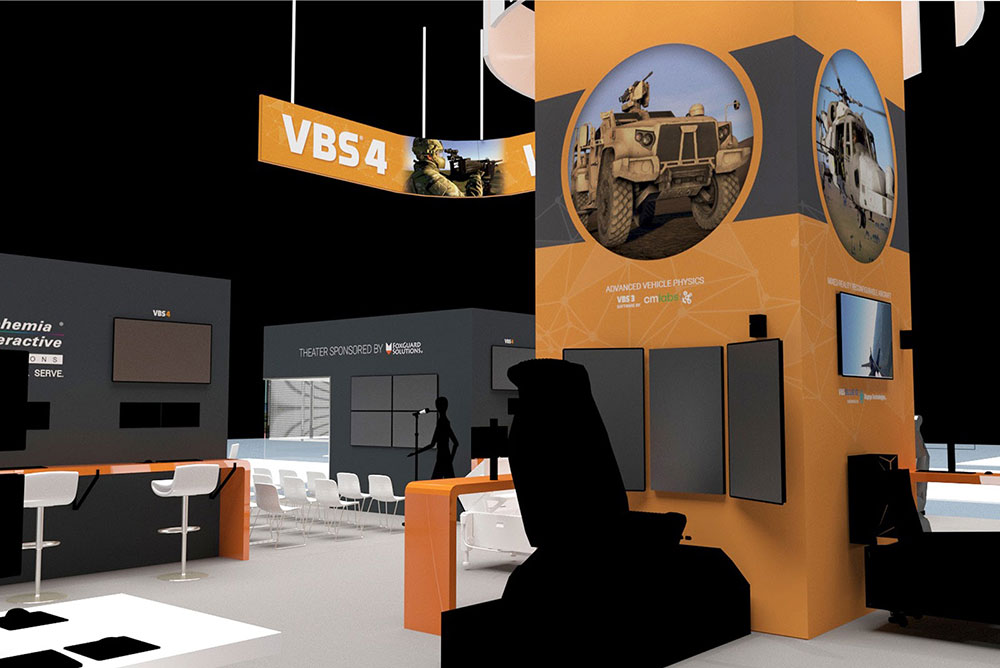 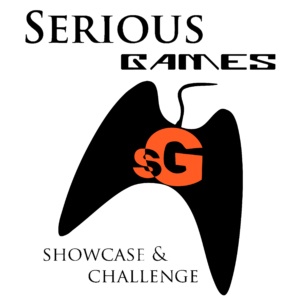 At I/ITSEC, TerraSim will demonstrate the VBS World Server, which underpins terrain data streaming and editing for VBS4. Our World Server is based on open standards for streaming terrain data to VBS4 and any other runtime system. A modular architecture allows the use of plug-ins for emerging and legacy terrain data formats, and enables advanced capabilities including real-time terrain editing.

We will also be demonstrating the latest features in TerraTools including the capability to use UAV survey imagery for 3D terrain reconstruction and updates to support the latest releases of VBS3, VBS Blue IG, VBS4, OneSAF, CDB and more. 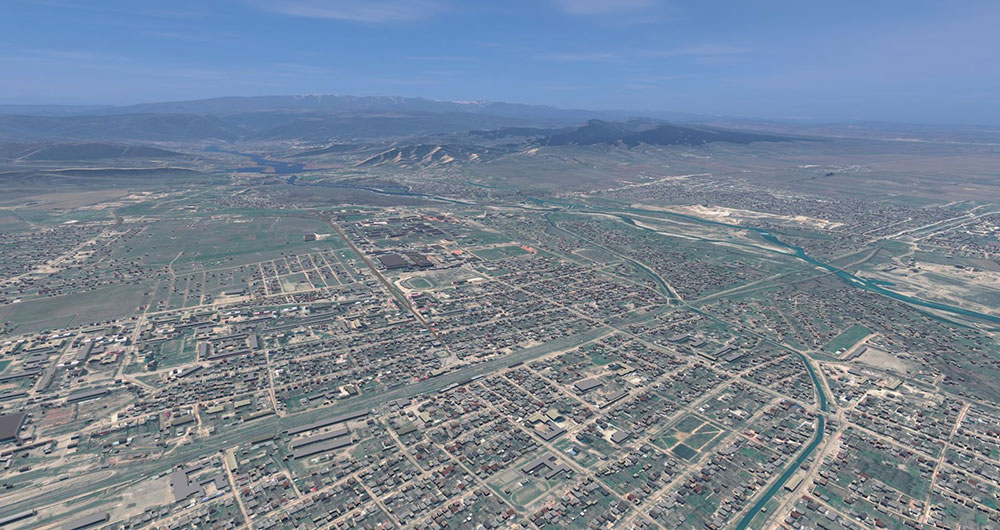 TerraSim Inc., a Bohemia Interactive Simulations Company, is a leading geospatial technology company that develops advanced software solutions to automate the generation of 3D terrain databases. Our software support export to the widest range of visual, constructive, and serious game runtimes in the industry.

For more information about TerraSim or our products, visit us on the web at www.terrasim.com or email us at sales@terrasim.com.

At I/ITSEC 2019, CM Labs will be highlighting an all-new, VBS3-based driver training scenario with advanced vehicle physics. This demonstration—enabled by the Vortex Studio for VBS integration—has been deployed with full-motion and realistic controls on CM Labs’ Vortex Advantage simulator hardware.

Vortex® Studio for VBS3 is a ground-breaking development in military training simulations, a software integration allowing VBS3 users to enhance scenarios with Vortex Studio’s powerful dynamics. Users can create high-fidelity simulations of vehicles for training and mission planning in both on-ground and amphibious situations. 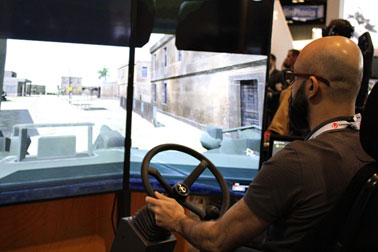 MotionSystems specializes in designing and manufacturing of motion platforms and full motion simulators. MotionSystems is an innovative company pushing the limits of professional and entertainment motion hardware and software technology. They deliver quality products - designed and produced in Europe. MotionSystems’ mission is to expand the customer experience - motion is no longer a luxury for any simulation system. 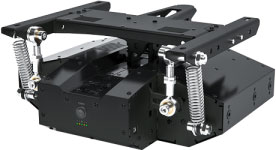 Raydon Corporation was organized in 1988 and is a certified Small Business. Raydon is experienced in managing the full project lifecycle: development, production and logistics. Raydon has developed, produced and fielded 862 military wheeled vehicle and tank driver simulators that train driving skills for gunnery, convoy security and route clearance collective missions.

For over 60 years, Systems Technology, Inc. has been a research pioneer in vehicle dynamics, human factors and simulation technologies.

Today, with our unique parachute simulator, PARASIM®, we are advancing virtualized training beyond any current barriers. PARASIM enables safe training that increases jumping accuracy, effective procedure performance, and ultimate mission success. Building on our historical excellence in dynamics and human factors, and merging them with best of breed concepts and visual imagery, STI is leading the next generation of training simulation technologies. 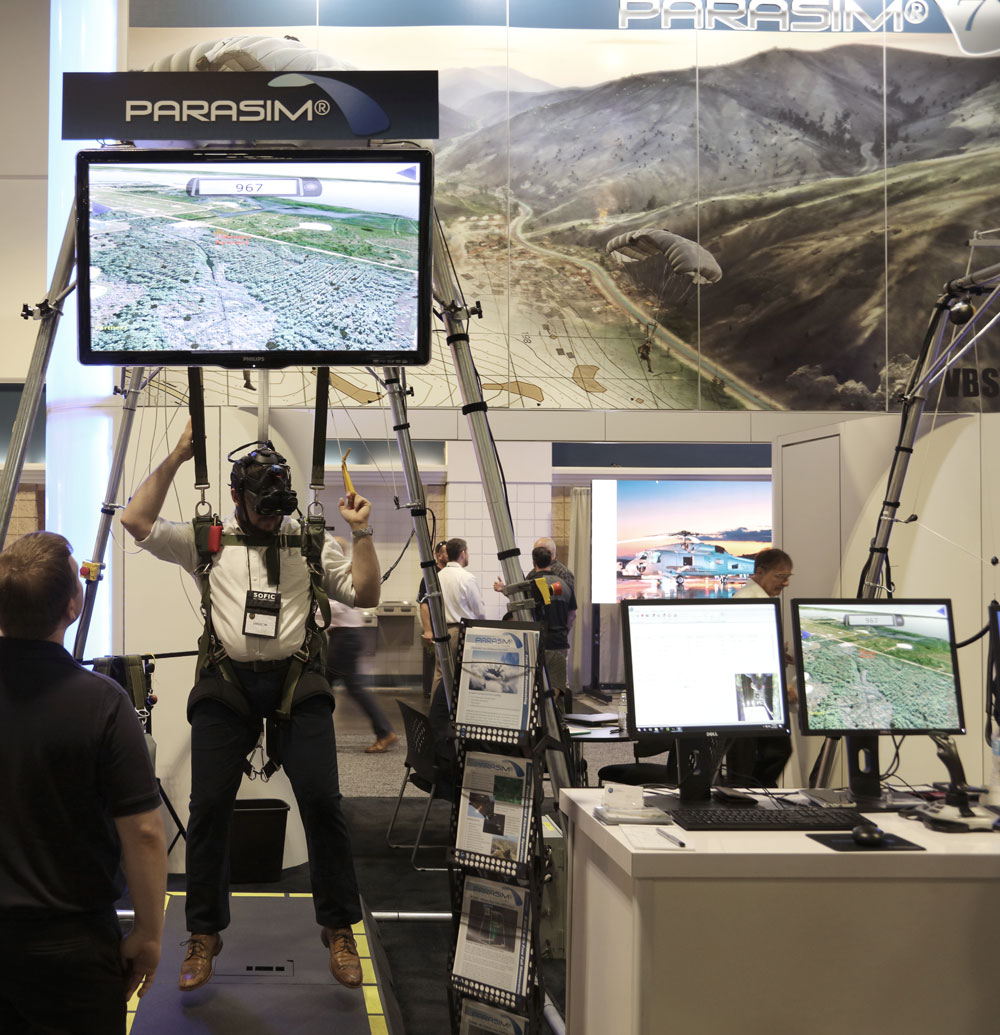 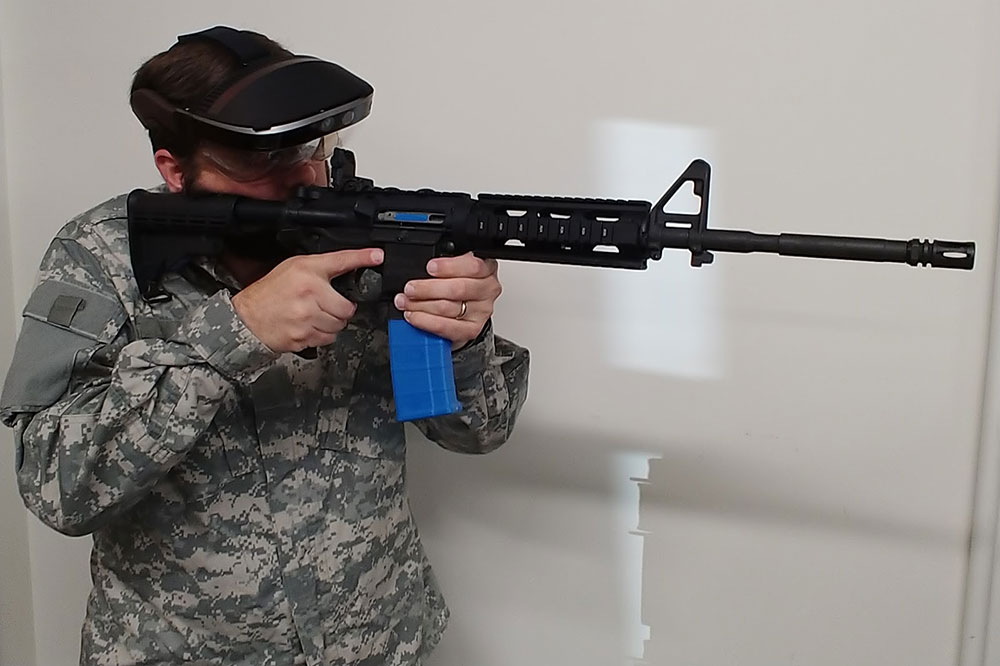 Bugeye has long been known for high quality simulated flight hardware, and RVCT the provides the ideal platform with which to deploy these solutions. The RVCT to be displayed at the BISim booth is Bugeye’s 2nd generation RVCT. 3rd and 4th generation RVCT versions are available and offer an even higher level of fidelity, reconfigurability (to include fixed wing aircraft), portability and simplicity. The primary flight controls within Bugeye’s RVCT are control loaded and electronically linked. All of Bugeye’s hardware is software-agnostic and has been integrated with a wide variety of software solutions on the market. While primarily developed for collective training, the Bugeye RVCT can be scaled up or down to accommodate a wide variety of training missions. 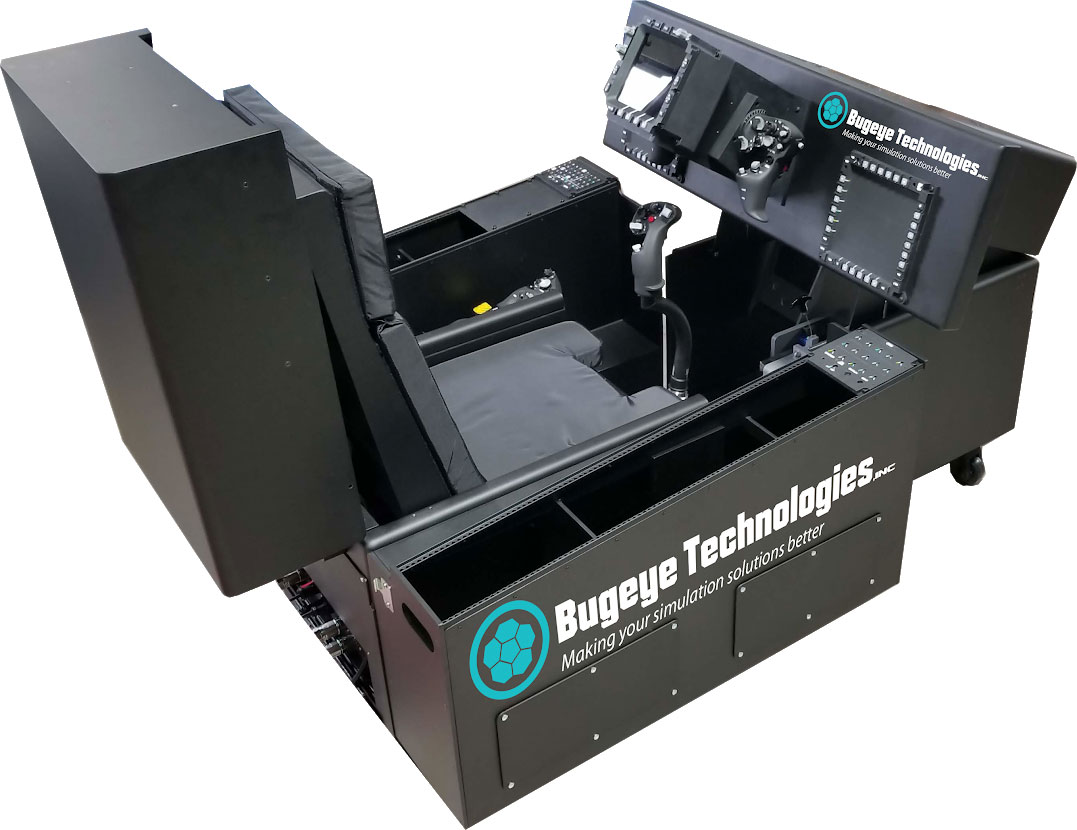 To see the latest from Bugeye Technologies, visit us at booth 1386 or contact kzick@bugeyetech.com to arrange a demo.

FLEX-air from SA Simulations, is a comprehensive, human in the loop, virtual simulation development and runtime solution. Each product in the FLEX-air suite provides cost effective and rapid development tools for all your simulation requirements. Discover how FLEX-air can reduce the time and cost to market, while delivering the highest quality solutions. Talk to us about how FLEX-air can integrate with your current development environment, and how you can unleash your productivity. FLEX-air will be used as the simulation host and provide all systems modelling, avionics, flight models, animations, and interactions for BISim’s T-45 VR simulation at I/ITSEC 2019.

ZedaSoft develops innovative products for the simulation and visualization industry. Its customers include Lockheed Martin, BAE, U.S. Army, U.S. Air Force and other defense, Government and commercial organizations. The main goal at ZedaSoft is to strike the balance between agility and cost-effective deployed solutions utilizing a modern open architecture. Zedasoft will provide their simulation host and avionics software for BISim’s mixed reality demonstration of an AH-64 at I/ITSEC 2019.

We would love to see you at I/ITSEC. If you're going, please visit us at booth #2534, or email sales.us@bisimulations.com to arrange a meeting with us. For media and press inquiries, please contact Hannah Goodwin, BLASTmedia for Bohemia Interactive Simulations.