New Tools for AI Behavior Creation in the Works

As part of Bohemia Interactive Simulations’ ongoing efforts to modularize the Virtual Battlespace game engine, our developers have created a new artificial intelligence behavior creation toolkit, which is being used to create AI behaviors for new products like VBS Tactics, our 2D interface for controlling doctrinally correct AI in VBS3. We recently spoke with senior game designer Martin Kolombo who is leading the development of VBS Control.

BISim: What is VBS Control?

Martin Kolombo: VBS Control is an AI behavior creation toolkit. It enables a new kind of AI to be created for VBS3 and other BISim products such as VBS Tactics and VBS Blue.

BISim: What prompted the creation of this new AI toolkit?

Martin: The main motivation was that existing VBS AI is hard-coded into the engine, which makes it difficult for non-programmers to modify. So we decided we would start from the ground up by creating a powerful tool to give us the ability to create new AI behaviors without having to be an engine programmer. To be clear: We’re not replacing the existing AI in VBS3, but are creating VBS Control as a way to build new AI alongside of the existing behaviors. 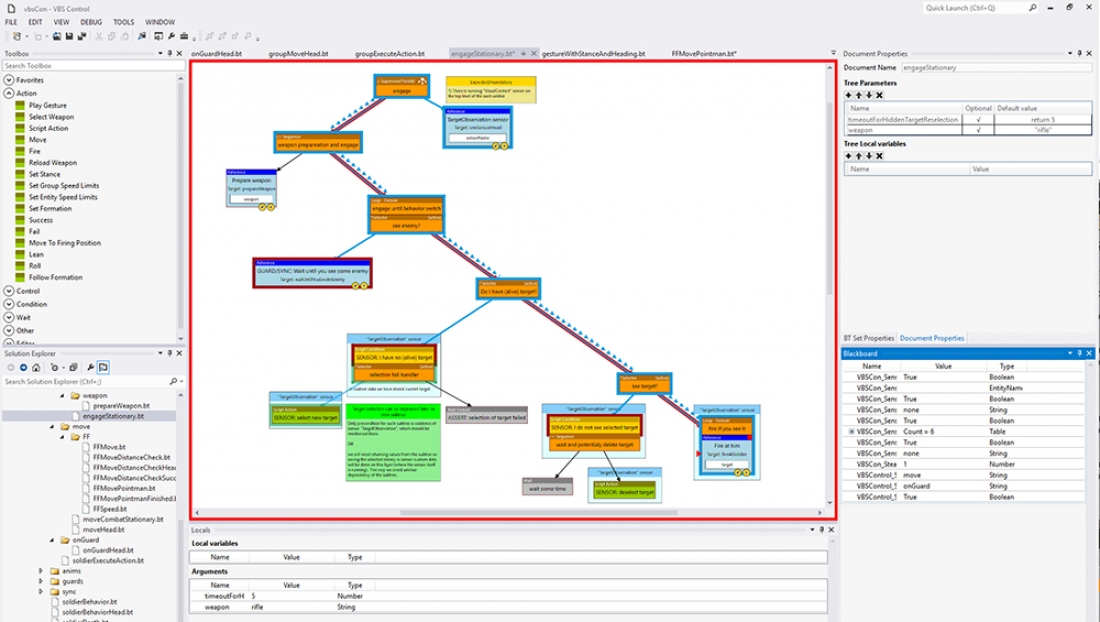 Martin: The old AI used FSM (Finite State Machines) which are difficult to maintain and difficult to manage when behaviors get more complex. Some behaviors were also hard-coded directly in the engine, which made them impossible for third parties to modify via the FSM.

With VBS Control, which uses behavior trees, AI becomes more modular. Because it is a tree structure you can go in and add a new AI decision without having to update everything else. All behaviors are created in the behavior trees (as opposed to the engine), which are accessible to third-party users of the toolkit.  Another key highlight of VBS Control is the use of new navigation technology called navmesh. It allows the AI to more efficiently navigate on maps and find very smooth paths in corridors and buildings. VBS3’s existing AI uses grid style with little over 1m precision. Old AI couldn’t navigate freely inside buildings, instead it could only move along pathways that had to be predefined in the model. With this new navigation technology, AI will be able to navigate all areas of the environment that a human player could reach and with future updates, recognize changes to the terrain, which means it will still navigate correctly even after a map is modified in the editors or when buildings are created or destroyed.

BISim: You gave a presentation to a game industry AI conference a year ago about some of the team’s early work. What’s been the initial reception from the game industry?

Martin: The game industry has been very interested in our approach and considers it innovative. We presented the back-end behavior tree technologies used in VBS Control. We have taken inspiration from normal programming languages and applied these concepts to behavior trees. We’ve applied a function paradigm to behavior trees which allows you to define parts of behaviors as reusable sub-trees and thus have simpler trees which makes the AI more extendable and easier to read. We are not the first or only ones to use this approach but it’s still cutting edge technology. At the time of presenting our approach, we had found only one scientific paper describing a similar approach. For us now, it’s a proven concept. 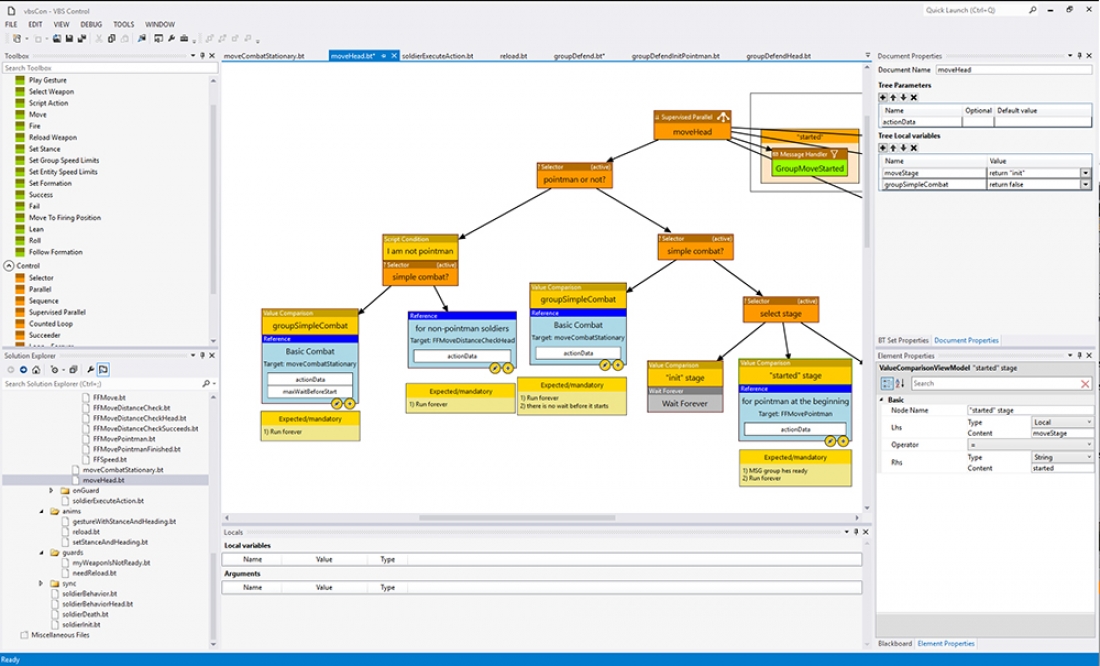 BISim: How has VBS Control been used with VBS Tactics?

Martin: We have used VBS Control to build platoon-level doctrinal behaviors for VBS Tactics. We are planning in the future to expand to build and include vehicle behaviors in VBS Tactics, using Control.

Martin: We believe integrators will be the early adopters of VBS Control. They are highly technical users who want to build AI from the ground up in VBS3 for their customers and create more advanced behaviors. Of course, BISim can also leverage VBS Control internally for non-integrators who request AI changes through funded development work in VBS3. For example, a military customer might want specific civilian AI behaviors at an airport to teach security practices and procedures. This is something BISim could build for them right now using VBS Control. We’re planning to demonstrate VBS Control publicly at ITEC and to make it available for customer purchase later in the year.