Bohemia Interactive Simulations’ (BISim) proudly announces the upcoming release of VBS4 20.1, BISim’s most important software release since 2013. Slated for release the week of August 17, VBS4 20.1 is a full and complete replacement for BISim’s highly successful VBS3 product and starts the next revolution in Virtual Battlespace technology.

VBS4 is an easy-to-use, whole-earth virtual and constructive simulation. It offers a massive step change over VBS3, providing greater ease of use, enhanced performance, and a whole-Earth terrain representation.

From August 2020, VBS4 becomes BISim’s flagship product — a fully featured desktop training and simulator-ready replacement for all VBS3 capabilities, with its hundreds of use cases and integration possibilities. On top of that, VBS4 introduces VBS Plan and VBS Geo modes for fast and accurate scenario and terrain generation and VBS World Server (VWS), a complementary companion product to VBS4 which allows training anywhere on planet earth instantly out of the box.

Put those together and add in the underlying VBS Blue engine technology and you have literally opened up the ‘world’ of training possibilities - leverage robust cutting-edge gaming and geo-spatial technology to train a vast array of missions at many different echelons whilst utilizing VBS Plan and VBS Geo to minimize the need for technical knowledge.

VBS4 is truly a game changer.

Focus on Ease of Use

In VBS4, ease of use is paramount. The new main menu workflow, mission-planning mode VBS Plan, and terrain-editing mode VBS Geo are all built for use by non-engineers. Users create “Battlespaces” that are a collection of terrain edits, mission plans, scenario files and after-action reviews. Each Battlespace is centered on a specific location on the virtual Earth. So, everything you need for the mission and the debrief is in one place.

The power of VBS is opened up for every military trainer without the need for extensive technical background or long training courses. Make your plan, build your terrain with easy-to-use interfaces and focus on the learning points of the exercise rather than the technical aspects of setup.

Not Your Typical Game Engine

The engine that VBS4 is built on (VBS Blue) is optimised to serve the military simulation and training domain, unlike many other ‘game-engine’ based simulations. VBS Blue offers millimeter accuracy and global scale simultaneously, and it has a flexible terrain ingestion pipeline facilitating quick use of terrain data from any conceivable source. Its capability is built beyond ‘video game-targeted technology’ to specifically solve global-scale challenges and is optimized to handle thousands of Artificial Intelligence (AI) entities, densely vegetated areas, and complex urban areas rendered at any altitude (from space to blades of grass or the ocean floor). 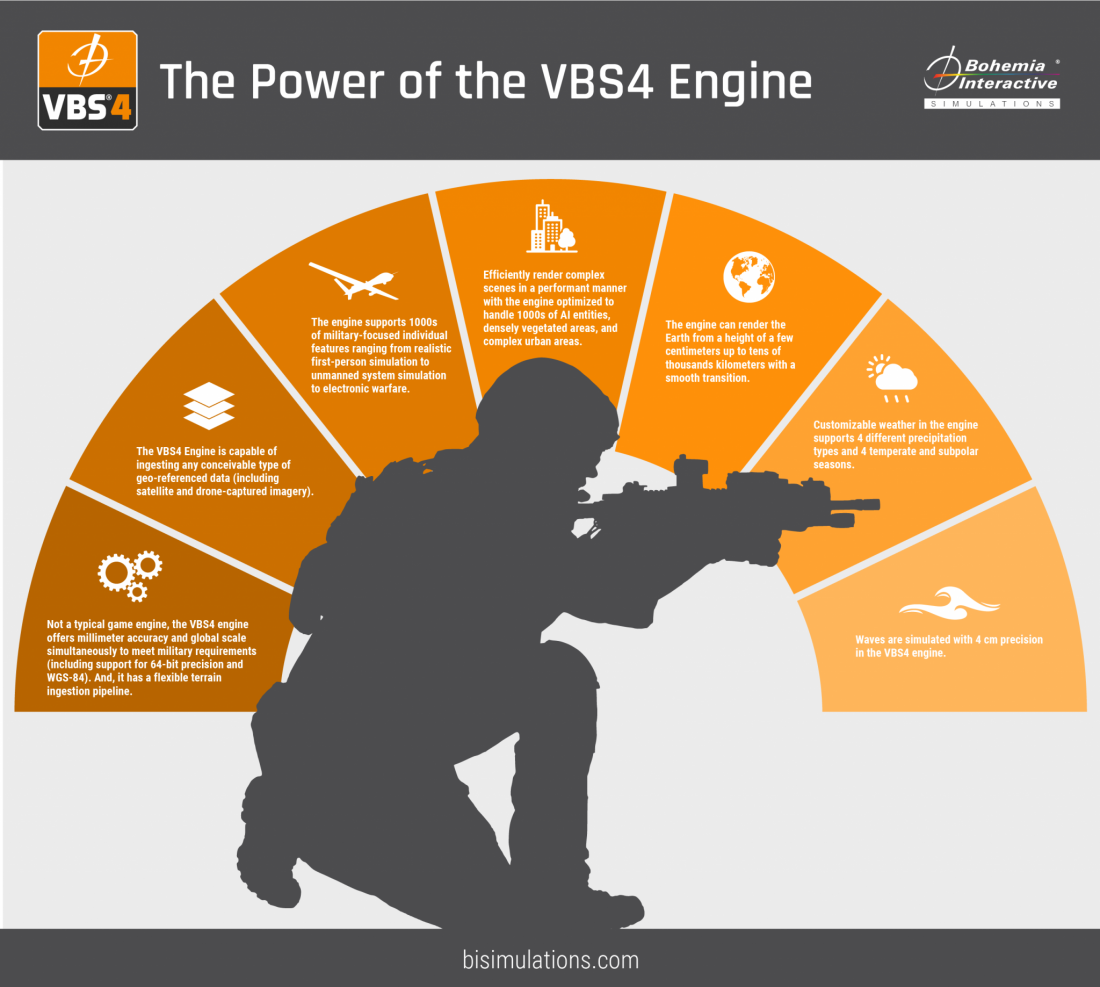 How VBS4 Enhances Your Virtual Training

Using VBS4, your virtual training capability is enhanced by

Massive Scalability — Unlike VBS3, VBS4 supports thousands of high-fidelity constructive (AI) civilian and military entities in the same Battlespace. In the very near future, tens of thousands of entities will be supported using cloud scalability technologies, delivering realistic cluttered and congested training environments and replicating the scale of real-world combined arms and/or joint operations.

Global Terrain Server Flexibility — VBS World Server (VWS) adds the option of a central terrain server capability to a VBS4 setup. This facilitates ease-of-use for the administrator who only needs to administer one terrain database as well as reduces hard drive requirements on the VBS4 client PCs.

Terrain Agility — Execute scenarios anywhere in the world within a high-fidelity, procedurally enhanced whole-world database out of the box. Improve the existing whole-Earth base terrain with the new and intuitive VBS Geo mode or generate new high-fidelity insets rapidly without the need for terrain experts. VBS3 terrains can be imported into VBS4, and they will be seamlessly meshed into VBS4’s global dataset.

Improved Classroom Efficiency — The revolutionary VBS Plan mode in VBS4 enables non-engineers to rapidly generate complex scenarios. VBS4 starts up in under 15 seconds (3x times faster than VBS3) and, with the VBS World Server, data is managed and stored centrally, massively reducing the administrative burden of large classroom set-ups. VBS Plan, VBS Geo, and the overall improved design of user interfaces in VBS4 offer users easy access to the vast capability of VBS4. Non-engineers can build missions 10-30x faster & edit terrains 10x faster in VBS4 vs. VBS3 and without time-consuming familiarization training. VBS4 frees up instructor time to concentrate on learning points of an exercise by greatly increasing the speed that training content can be generated, leading to more effective training.

The August release of VBS4 20.1 is a full replacement of all of VBS3’s capabilities. In addition to its superior performance, it features VWS, a companion product, and the new game-changing VBS4 modes of VBS Plan and VBS Geo.

The subsequent VBS4 20.2 release, planned for the end of 2020, will see even more innovation, expanding VBS Plan, VBS Geo and VWS further based on extensive customer feedback. And in 2021, BISim will continue to expand VBS4 capability as we incorporate further significant investments from our global customers and through a continued BISim-funded program of improvements.

To request a demonstration or purchase licenses of VBS4, contact BISim at [email protected]

*When comparing to other ‘model libraries’, please note that BISim’s universal component system (which allows compatible models to be attached together in any valid combination) vastly reduces the number of 3D models in the library. Compared to a 3D model library without a universal component system, the BISim 3D model count would be 50,000-60,000.